Skip navigation!
Story from Beauty
Photo: Courtesy of Glossier
With the exception of the 2003 cinematic masterpiece Legally Blonde 2: Red, White & Blonde, sequels are never better than their predecessor. Another exception just launched today: Glossier's second-ever cleanser, Cleanser Concentrate. According to beauty legend (aka this 2015 Into The Gloss post polling readers on their "dream face wash"), Glossier's debut cleanser, Milky Jelly, was all about delivering a gentle yet thorough clean that wouldn't disrupt sensitive skin. However, for those (like me) who typically crave a deeper clean with a side of mild exfoliation, it didn't necessarily become an everyday go-to. During a recent Zoom call with editors, founder & CEO Emily Weiss revealed that this schism had emerged early on; readers either craved a mild formula or one packed with actives. In that sense, the idea behind the Cleanser Concentrate has been in the works for over five years — and I tried firsthand to suss it out. Keep reading to get up close & personal with me, my face, and the new Glossier product that actually gets me excited to wash up at night.
Advertisement 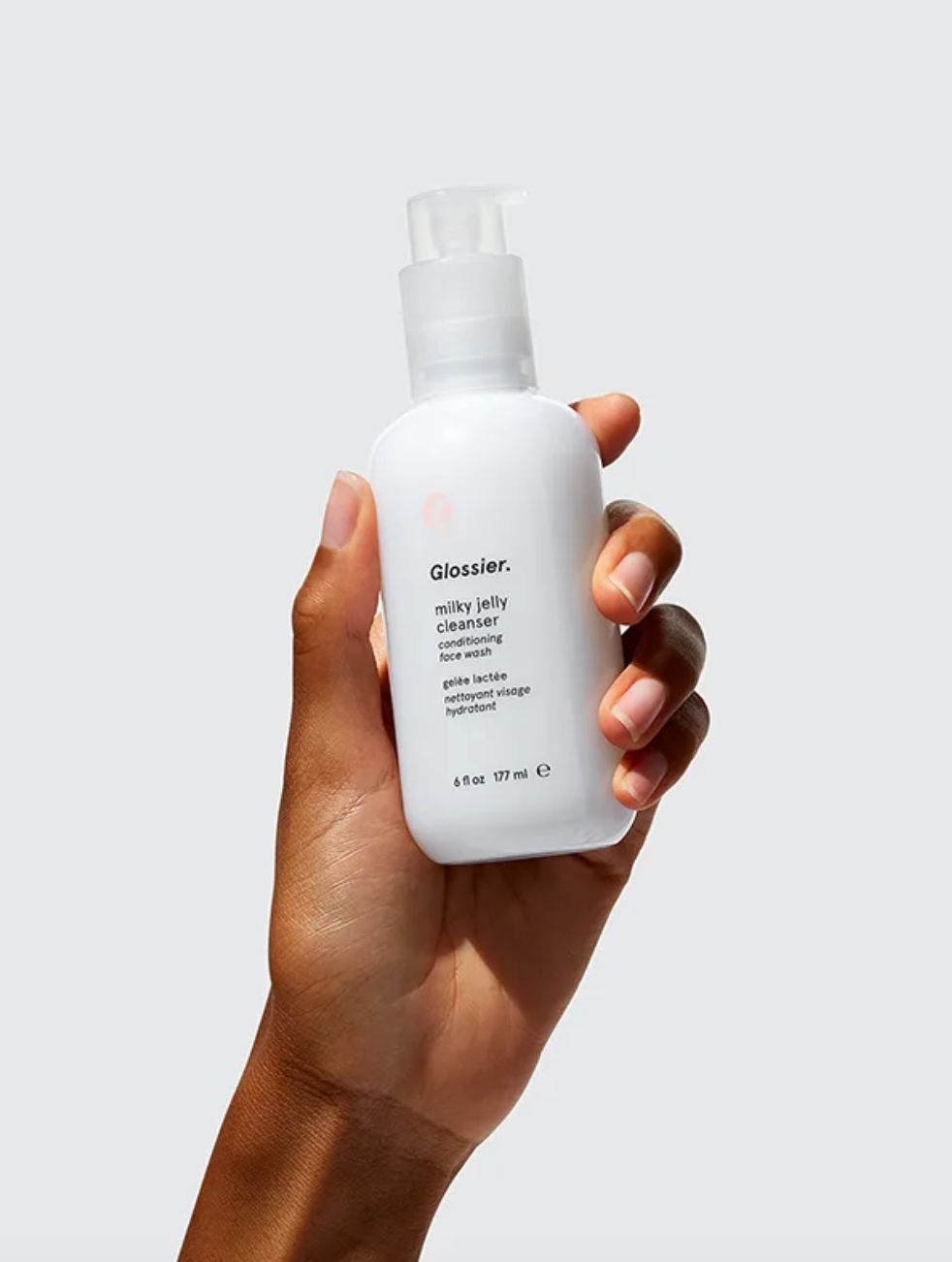 Right off the bat, the packaging is like, really pretty. Unlike most Glossier products, Cleanser Concentrate is encased in a recyclable glass bottle. Gel cleansers are my jam, so I was pretty stoked — this one is described as "A highly concentrated cleanser that exfoliates, clarifies, and re-energizes skin in 60 seconds." Upon pumping out a bit onto my palm, I didn't notice any fragrance — it's made from a blend of chamomile flower water, calendula extract, and antioxidant-packed passionfruit extract — and the gel had a runny, honey-like consistency. I applied three little pumps (according to the brand, "A little goes a long way!") in circular motions onto my face to generate a bit of lather. I was surprised at how easily and quickly it rinsed clean for a gel; some I've tried require enough water-splashing to star in a Neutrogena commercial.

I've got oily, acne-prone skin, so I tend to appreciate a clarifying or exfoliating face wash to keep breakouts at bay. While ingredients like AHAs, grape ferment, and amino acid surfactants (in lieu of sulfates) help do just that, my skin didn't feel tight and mask-light after washing. Instead, my complexion felt balanced and clean.

After almost two weeks of testing, I have yet to see if it visibly brightens my acne scars over time. That said, it more than does the job in terms of whisking away oil and dirt from my pores. (Plus, at $20 for a 3.3 fluid ounce bottle, it feels like a fancy AF treat for my skin.) I've been using it twice a day, but dry or sensitive types may be better off using it at night or every other day. My hope is that as I continue to use this up, it'll help ward off maskne and keep my complexion in tip-top shape.
Advertisement
It's hard not to get excited about a new Glossier drop. The sleek new packaging and quirky name all make for the best kind of beauty butterflies. With summer right around the corner, I'll be in the market for a clarifying face wash to keep in heavy rotation — and something tells me this one will certainly fit the bill.
At Refinery29, we’re here to help you navigate this overwhelming world of stuff. All of our market picks are independently selected and curated by the editorial team. If you buy something we link to on our site, Refinery29 may earn commission.
Most Wanted
Body Masking Is The New Summer Beauty Trend To Try
by Karina Hoshikawa
Beauty
The Best Sunscreens For Glowing Summer Skin
by Karina Hoshikawa
Skin Care
The Anti-Retinol Movement Is Upon Us — But Does It Hold Up?
Dr. Barbara Sturm came by her stellar reputation in the beauty industry as the innovator behind a bespoke cream based on a patient’s own blood. Since 200
by Rachel Krause
Advertisement
Most Wanted
Stock Up On Supergoop! Sunscreen While It’s 20% Off
by Karina Hoshikawa
Beauty
Setting Sprays With SPF Are Your New Summer Makeup Must-Have
by Thatiana Diaz
Plastic Surgery
The Cosmetic Surgery “Zoom Boom” Is Real — But There&...
While loss has been an inescapable theme of COVID-19 — loss of life, jobs, community, security, even our senses and hair — some have seen surprising ga
by Jolene Edgar
Skin Care
I Got “Face Balancing” Filler & It Gave Me So Much Co...
I’ve always been conscious of my side profile, particularly the size of my nose. In my family, we have a running joke about my dad’s nose being his mos
by Rebecca Fearn
Beauty In A Tik
I Tried TikTok’s Face-Shaving Hack For Smooth Skin & I̵...
Among TikTok’s smartest beauty trends such as skin icing (for a glowing complexion) and ditching eye cream (trust us on this one) are a handful of sl
by Jacqueline Kilikita
Beauty
12 Gua Sha Stones For Super Easy Home-Facial Massages
by Karina Hoshikawa
Beauty
The Big Lie You’re Being Told About Achieving Great Skin
In my years of working as a beauty editor, I’ve interviewed countless celebrities and influencers about their beauty rituals. Without fail, the major
by Jacqueline Kilikita
Asian Beauty Products
Soko Glam’s Spotlighting 7 Asian Beauty Founders This Month...
by Karina Hoshikawa
Skin Care
Why People On TikTok Are Using Glycolic Acid As Deodorant
TikTok is full of beauty hacks; some genuinely smart (like the one-minute messy bun trick and the easy face-lifting technique), others decidedly questionab
by Jacqueline Kilikita
Advertisement
Advertisement
Discover
R29 Stories & News
Watch
R29 Original Series & Films
Shop
R29's Most Wanted