Skip navigation!
Story from Fitness
P.volve may have entered the home-workout scene back in 2017 but now, in 2021 (as we squat it out in front of our couches), it's trending stronger than ever. The popular fitness method involves a digital membership of streaming on-demand and live classes that utilize specialized equipment to offer low-impact strengthening through functional movement (more on that below!). The company is currently running a 30%-off promo on all of its bestselling fitness kits (just use discount code NEWYEAR30 at checkout). This includes everything from its Starter Kit all the way up to its Total Transformation Kit — all of which are bundled with a free three-month membership to P.volve's streaming fitness library. Additionally, new subscribers can currently snag a free 14-day trial of the digital membership plus 30 days of free LIVE classes. Read on for a full P.volve rundown if you'd like to learn more before signing up.
Advertisement
shop 4 products 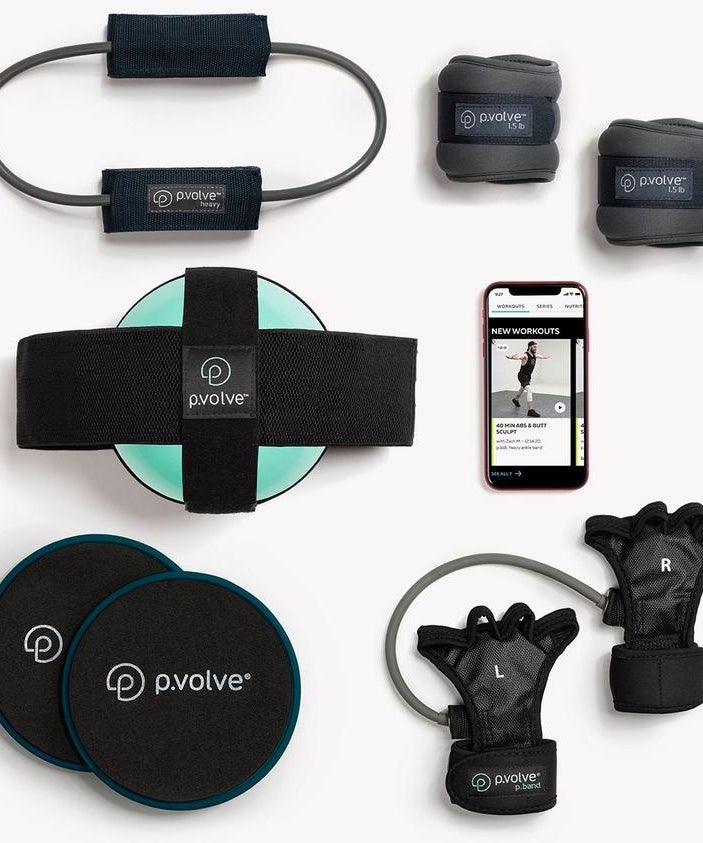 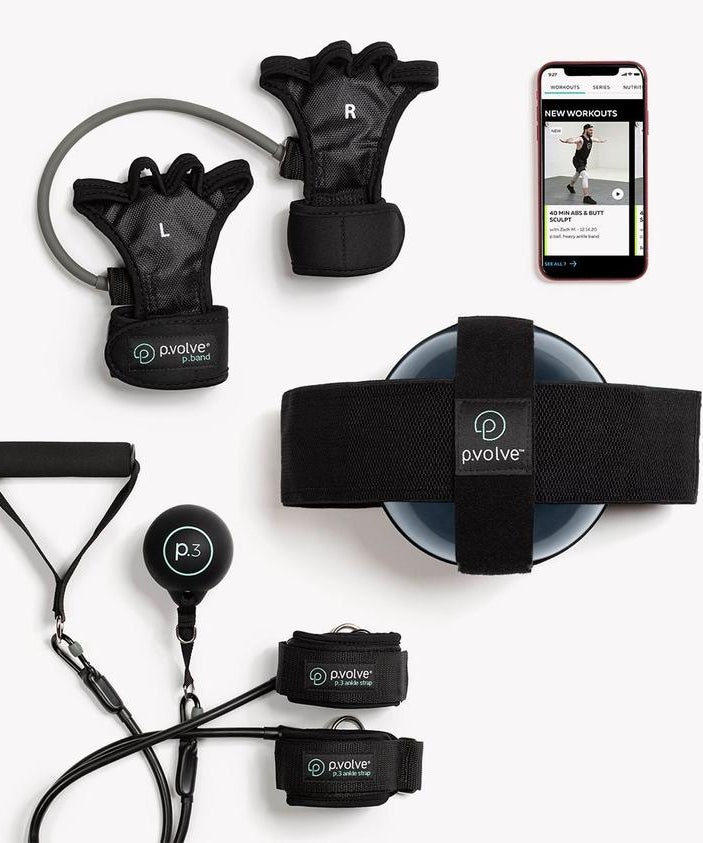 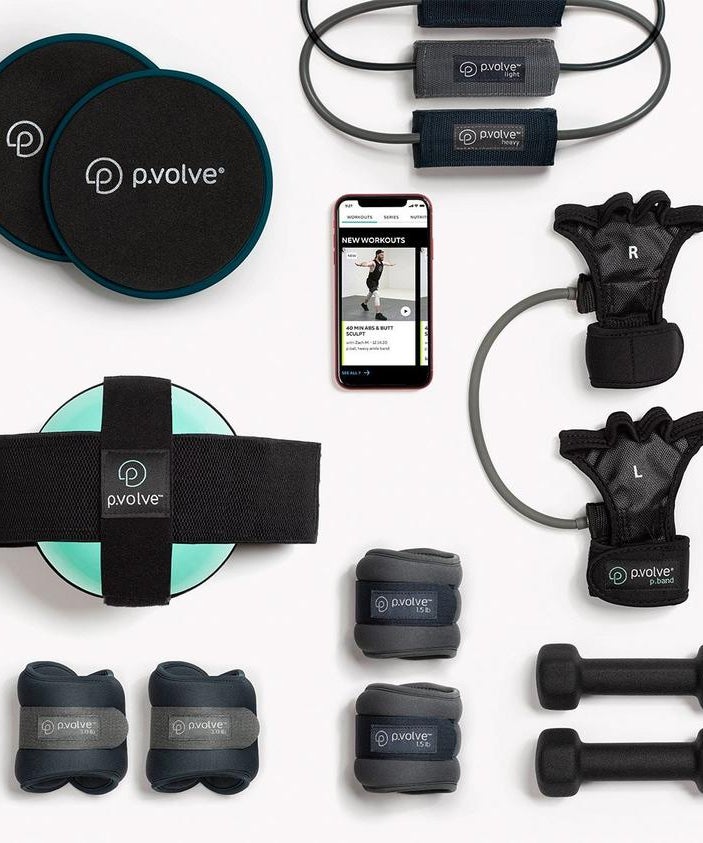 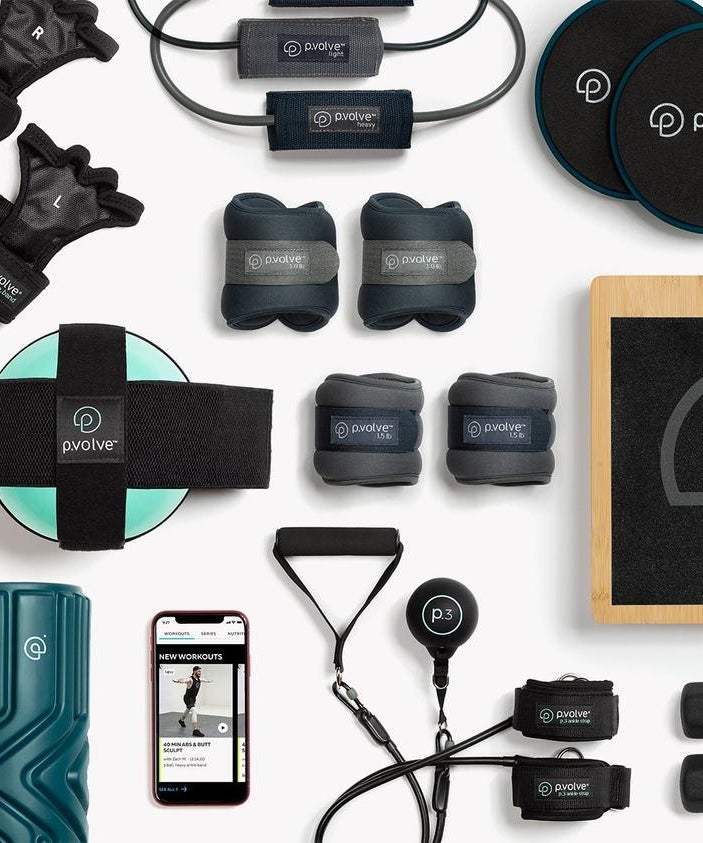 P.volve was created by trainer Stephen Pasterino (best known for working with Victoria's Secret models) who was fed up with workouts that didn't translate to real-life movements. "What the muscles do when you're moving versus how people use them in the gym are two different things," Pasterino says. At P.volve, Pasterino is very intentional about the exercises he chooses. Most of the movements mimic walking, and although the class is billed as a "functional workout," he does not do any squats or lunges, because he believes they go against functional training. His rationale is that most people have overly trained quads, which is a "dysfunction," or not the way the body is supposed to work. Instead, Pasterino tells his clients to do something called a "P.sit," whereby you hinge at your hips kind of like you would in a deadlift. "Most people don’t have really good hip flexion, and their butt doesn’t turn on when they go down, so everyone bends through their back," he says. Using the P.sit and a series of steps and reaches, it can increase hip flexion and activate the glutes, he says.

What does the p.ball do?

According to Pasterino, the p.ball is meant to put pressure on your inner thighs. Lots of exercise programs (like Pilates or barre) incorporate exercises with a ball between your legs because it requires strength to keep it in place. The p.ball is strapped to your legs, so you don't have to do any muscular work to stabilize it, it's just there to "help those muscles communicate with the brain to activate them," he says. "My ball has the right amount of pressure to push into those muscles, and then it also has a strap that holds it in the right place."
Advertisement

What is functional fitness?

Functional fitness is certainly not new, and it's one of the most important concepts involved in exercise. Basically, functional training can be defined as doing movements that are performed in daily tasks or life activities, explains Tara Romeo, CSCS, CES, USAW, director of the Professional Athletic Performance Center in Garden City, NY. Training functionally can improve the overall way your body works, she says. Some classic functional movements include squats, lunges, presses, or biceps curls, but functional exercises can range from simple to complex, Romeo says. For example, medicine ball sit-to-stand with a press, a farmer's carry, and dumbbell step-ups all classify as "functional" exercises because they simulate things that you do at work or at home, she says.
With gimmicky equipment and salacious subway ads, many of us may be quick to write off P.volve as another fitness fad, not a truly functional training program. But it's important to note that what makes a movement "functional" for one person doesn't necessarily mean it's functional for someone else, Romeo says. "Each program should be tailored to a person's specific needs, and what they are looking to improve for their overall quality of life," she says. In other words: You do you.
At Refinery29, we’re here to help you navigate this overwhelming world of stuff. All of our market picks are independently selected and curated by the editorial team, but if you buy something we link to on our site, Refinery29 may earn commission.
Workout Clothes
Eco-Conscious Workout Gear That Actually Performs
by Emily Ruane
Dedicated Feature
Outdoor Adventure Sports Aren’t Inclusive Enough — Here’s How One...
As an acclaimed skydiver, an active hiker, and a military veteran, Danielle Williams is nothing short of fearless when it comes to facing the great outdoor
by Roxanne Fequiere
Fitness
Lululemon’s Sizing Is More Inclusive Than Ever Before
by Karina Hoshikawa
Deals
Lululemon, Mirror, & ALL The 2021 Deals On Fitness Favorites
by Alexandra Polk
Deals
Welcome To R29’s The Score: The Best Deal On Mirror Fitness...
The life cycle of a promo code is much like a cloud; it floats around the internet only to vanish into the virtual ether at a moment’s notice. When w
by Alexandra Polk
Deals
This Exclusive 40% Off Obé Fitness Promo Code Is For R29 Readers ...
The Obé Fitness site is comprised of Instagram-worthy colorful lighting, stunning exercise experts, and an eclectic class schedule that’s also 9-to-5-fr
by Alexandra Polk
Fitness
What Are The Best Gym Bags For Women On The Go?
by Emily Ruane
Fitness
P.volve’s Popular Fitness Kits & Memberships Are 30% Off
P.volve may have entered the home-workout scene back in 2017 but now, in 2021 (as we squat it out in front of our couches), it’s trending stronger th
by Cory Stieg
Most Wanted
This Gear (Actually) Makes Working Out More Fun
by Karina Hoshikawa
Deals
Lululemon’s Holiday Shopping Event Just Landed — & It’...
by Karina Hoshikawa
Gift Guides
35 Gifts To Get The Runner In Your Life
by Molly Longman
Fitness
8 Fitness Gift Cards For Your Virtual Workout Crew
by Cortne Bonilla
Discover
R29 Stories & News
Watch
R29 Original Series & Films
Shop
R29's Most Wanted